Nintendo fans have become used to the Nintendo is doomed! mentality from mainstream gamers who prefer another console, but now somebody is putting their money where their mouth is in terms of that sentiment.

Gabriel Plotkin manages the Melvin Capital Management hedge fund, which has a $400 million short bet against Nintendo, as revealed by regulatory filings last month. If you're unfamiliar with the terminology, short-selling is when you borrow a stock from a broker to sell at the current market price in hopes of making a profit by buying it back at a lower price to cover your original loan. Despite the success of the Switch, Nintendo's stock performance has been anemic compared to other video game companies. 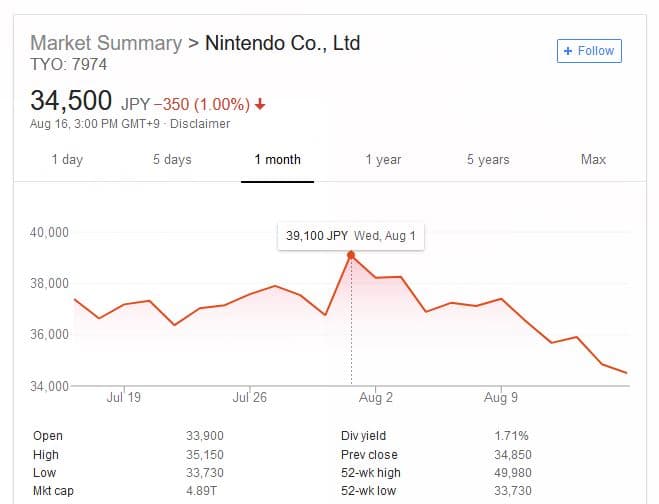 The company's stock surged after the Switch launch in March 2017, but it's 2018 performance has seen most of those gains eaten away. It's estimated that Plotkin's short on Nintendo stock accounts for about 7% of the daily volume of the company, which has continued to decline after a brief respite from quarterly earnings announcements.

Nintendo's last quarterly financial summary was a rosy one for the company, beating earnings estimates and sending the stock up 7%. That movement caused the hedge fund to show a $27 million paper loss, but it's unlikely Plotkin has closed his position as the stock has continued its backslide and all gains made from its earning report have been wiped out.

According to some industry analysts, shorting Nintendo and buying U.S.-based game companies like Activision Blizzard and Electronic Arts is a popular move among hedge fund managers. The addition of microtransactions, eSports, and Battle Pass subscriptions account for higher revenue producing opportunities in the gaming sector. Nintendo has always been slow to embrace these extra monetization trends, which has led to it becoming a target of short-selling.

It's estimated that Plotkin's short position on Nintendo accounts for about a third of all short positions against the company, with 2.5% interest in shorting over buying and holding.